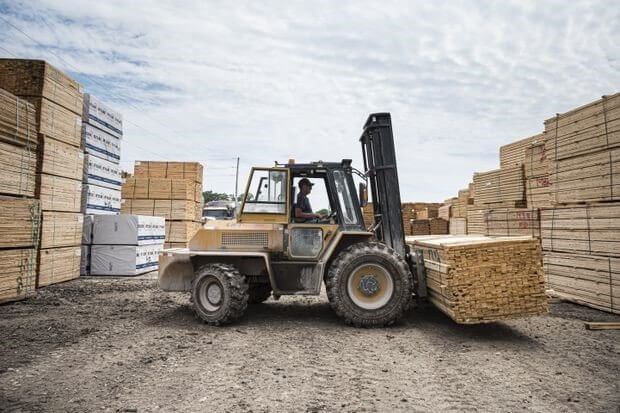 ‘We’re running flat out’: Why the wood pallet industry is on the edge

Manufacturers of wooden pallets are struggling to keep up with soaring demand and are being forced to charge their customers more as lumber prices have climbed to record levels during the COVID-19 pandemic.

Pallets allow forklifts and other equipment to pick up and move large loads of goods, and companies that depend on the wooden platforms to get their products to market must now absorb high costs and accept lower profit margins. Unless lumber prices moderate, experts warn those growing costs will be passed along to consumers.

The pallet industry sits at the intersection of a troubling Venn diagram: doubly affected by wood scarcity and unpredictable supply-chain needs. Many industry executives say that while their revenue has skyrocketed, they are struggling to remain profitable.

“We’re running flat out. We can’t cut any more lumber; we can’t produce any more product. Our costs are up on every front,” said Shawn Hicks, chief executive officer of CPS Wood Products in Cobourg, Ont., east of Toronto.

Mr. Hicks said it is almost impossible for his firm to increase its capacity to build more pallets because the wait time for the necessary machines is 20 months. Meanwhile, labour shortages continue to put pressure on CPS employees to work more days and longer shifts.

“We’ve had to turn away new opportunities from big companies – we just can’t handle the extra demand,” Mr. Hicks said.

Pallets underpin the North American supply chain. Used to help ship products between manufacturers, distribution centres and retail outlets, experts estimate pallets touch 90 per cent of the goods purchased by consumers at some point in the journey from production line to store shelves.

Canada had about 500 pallet manufacturers in 2020, nearly all of them small businesses employing fewer than 70 people, according to Statistics Canada. Added to this count are pallet brokers and suppliers who trade and store pallets. Manufacturing revenues totalled $1.1-billion in 2018. The United States is the industry’s largest export destination by far, and the two markets are co-dependent.

The U.S. Bureau of Labor Statistics said its price index for wood pallets and skids soared to its highest level ever in May, with prices up 29.8 per cent year over year. “We’ve had nothing like this in the last decade,” said Joseph Kowal, an economist with the bureau.

While softwood lumber prices have pulled back significantly in recent weeks, Mr. Geffros said, hardwood and aspen markets continue to rise. Industrial-grade lumber currently trades at US$719 per thousand board feet, down from the peak of more than US$1,400 in May, but still nearly double what it was worth last year, according to industry newsletter Madison’s Lumber Reporter.

So far, however, pallet prices and availability remain much the same.

Before the pandemic, CPS’s Mr. Hicks said he spent much of his day talking to customers and looking at sales models. Now, he spends most of his time managing lumber supply. One year ago, he would pay $30,000 for a rail car of lumber. At the peak prices in recent months, that amount soared to $149,000.

“When costs go up that high, it’s hard to stay ahead of it,” said Mr. Hicks, whose company processes three rail cars of lumber a day. Normally, he would have wood supply for up to the next six weeks secured. Now, he’s down to less than two.

In a just-in-time supply chain world, even one day late can send ripples down the line.

Pallets are also being tied up in warehouses for longer, contributing to the industry’s shortage, said Lisa Vegso, managing director for Canada of U.S.-based PECO Pallet Inc.

After the nightmare of supply shortages early in the pandemic – just remember the scramble for toilet paper, cleaning supplies and non-perishable foods – many companies began stocking up on inventory. Often, these goods remain on pallets until they go to store shelves, essentially taking those pallets off the market for months, said Ms. Vegso. Now, her company fields numerous new inquiries for pallets every day.

“We service some of Canada’s largest food manufacturers, and their production process relies on pallets. Without a pallet, they’re not able to move their product to the retailer. It’s equivalent to trying to make peanut butter but you don’t have the jars,” said Ms. Vegso said.

Shawn Brenn, president of Brenn-B Farms Ltd in Waterdown, Ont., west of Toronto, understands this concern. He relies on pallets to get the potatoes and onions he grows to market before they spoil.

“That’s one of my fears: to have to call my customer, a major retailer, and say, ‘I can’t ship a load of potatoes or onions today because I don’t have pallets,’ ” Mr. Brenn said. “They’ll laugh at me and think it’s a silly excuse but it’s not – it’s very real.”

The issue, he said, is not just the high prices, it’s the availability of certain types of pallets. Some grocery stores have very specific pallet requirements, such as uncommon dimensions or heat treatment of wood to ward off bugs, and those pallets have been even more difficult to find.

“When we call the pallet companies, they just don’t have those pallets to send us. And so now we’re having to call our customers and say, ‘Either we don’t ship the product, or we ship on whatever pallet is available,’ ” Mr. Brenn said.

His produce is less perishable than other types, such as lettuce, but not all farmers have been so lucky. “I know people who are pulling their hair out because their customers won’t make concessions and they literally watch their produce waste because of the lack of a pallet,” Mr. Brenn said.

The CPS Wood Products assembly plant in Coburg. Unlike pallet manufacturers in Ontario, some in British Columbia are finally starting to lower their prices as lumber prices also drop.

The high costs have also squeezed manufacturers of non-food items. Production lines typically depend on pallets to bring in parts from several sources. But car and bicycle manufacturing has often halted during the pandemic because of a shortage of parts coming from China, and often just one missing part can hold up the whole process. This leaves manufacturers with no choice but to absorb the high prices of pallets, or risk stalling output.

However, the cost doesn’t stay with them, said the wood pallet association’s Mr. Geffros, it is passed down the pipeline to consumers. At each point in the supply chain, a small increase is added to compensate for the price of shipping and packaging. Previously, that price might have been two cents a unit, he said; now it could be four cents.

“That’s going to not only be passed down the chain, but it’s also potentially going to be magnified as margin is added at each stop. We may not look at an increase of four cents as being a big deal, but by the time it gets to the consumer, it may be 10 or 12 cents. And that starts to add up,” Mr. Geffros said.

While it may still be too soon to see the full effect of pallet shortages, some analysts and executives do not expect the price of pallets to normalize for some time.

Brent McClendon, president of U.S.-based National Wooden Pallet and Container Association, said that although the cost of lumber futures has dropped in recent weeks from record highs, those figures don’t always reflect the industrial-grade lumber used to make pallets. And labour and trucking costs are still higher than usual.

“It’s really hard for supply chains to change quickly when you have a system that was built on just-in-time delivery,” Mr. McClendon said. One change he does foresee: greater automation in coming years, as labour shortages continue to worsen.

Unlike pallet manufacturers in Ontario, some in British Columbia are finally starting to lower their prices as lumber prices also drop. Dan Loftsgard, operations manager at Verbeek Pallet Supply Co. Ltd. in Mission, B.C., attributes this disparity to the different lumber sources – his lumber comes from B.C., while lumber for suppliers in Ontario comes from Northern Ontario and Quebec.

“I’m running into this problem where customers are hearing about the price drop, but we still have 2.5 million board feet at the high price yet to sell,” Mr. Loftsgard said. “My difficulty now is to get through this stuff and before we start dropping our prices.”

PECO Pallet’s Ms. Vegso said her company is waiting for lumber prices to moderate before ramping up its pallet production. Even so, she believes demand will continue to outstrip supply throughout 2021.

“The trend is moving in the right direction, and we are seeing prices down from their peaks. We’re starting to see supply begin to recover, but it’s going to take time to catch up,” she said. “We’re all suffering the same challenges, and just doing our best to manage.”

Cost of lumber skyrockets during pandemic