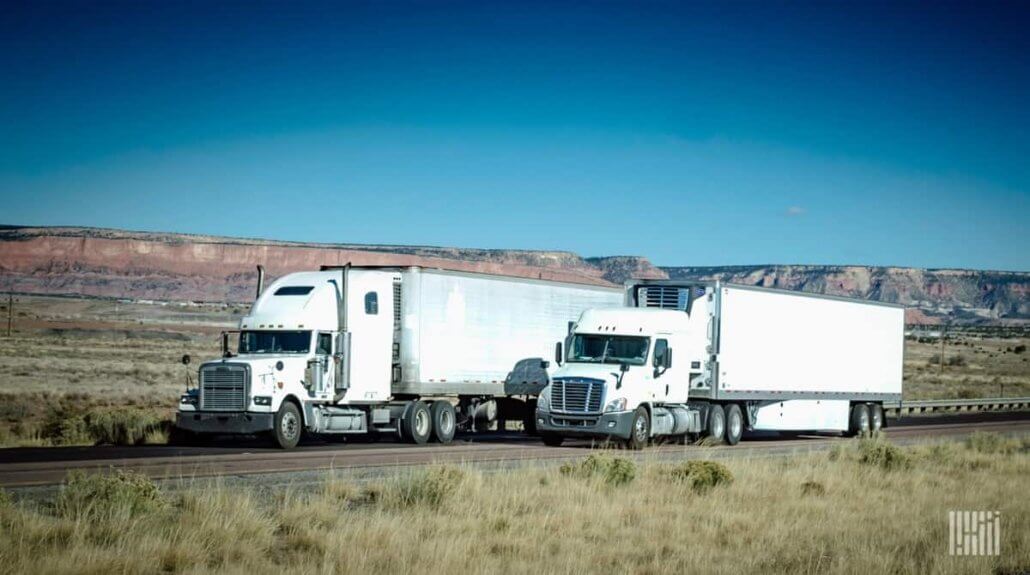 The firm’s transportation, retail and machinery analysts contributed to the report.

“We see five Trucking supply-side catalysts potentially constraining truck supply in 2020, similar to what the ELD mandate did in 2018. Memories of 2018 are still fresh which should help mitigate the impact but we still see risk to EPS [earnings per share] across Retail, tailwinds for Trucking (TLs) and Class 8 Trucks,” the report stated.

The firm highlights five catalysts that could draw down truck capacity.

The first is the final electronic logging device (ELD) rule requiring carriers to convert from automatic on-board recording devices (AOBRDs), an earlier version of ELDs that provided significantly less data and the capability to alter some data, to ELDs by Tuesday, Dec. 17, 2019. The mandate is intended to provide a “safer work environment for drivers,” making the flow of data easier and faster and ensuring the data is not compromised according to the Federal Motor Carrier Safety Administration.

The Drug & Alcohol Clearinghouse, which aims to speed the reporting of drivers’ positive drug or alcohol tests, was cited as potentially drawing down capacity as well. The clearinghouse is designed to prevent drivers from failing a pre-employment screening with one carrier then finding a job with another carrier before the positive test appears on their record. Reporting of failed tests on the federal database is required starting Jan. 6, 2020.

The International Maritime Organization (IMO) 2020 regulation, which begins Jan. 1, is aimed at significantly reducing sulphur emissions by enacting a 0.5% sulfur restriction in 2020, which is down significantly from the existing 3.5% mandate. This will require the maritime industry to use fuels with lower sulphur content. The expectation is that this will create increased demand for refined products like diesel. The range of forecasts on the impact of diesel demand is wide, with some speculating that as much as 2.5 million barrels of distillate per day would be needed to offset the high-sulfur fuel oil that the maritime industry can no longer use without installing scrubbers.

Morgan Stanley estimates that diesel prices could increase by 5-33%, placing increased financial strain on the smaller carriers, which make up the bulk of the TL industry. The thought is that many smaller operators have inadequate fuel surcharge programs in place to pass through the fuel cost increase to the shipper.

Lastly, the report cited California Assembly Bill 5, or the California AB 5 rule, as a headwind for truck capacity. The rule, which goes into effect Jan 1, 2020, is designed to limit the definition of independent contractors, requiring many of the independent owner-operators with whom carriers contract to haul loads to be reclassified as company employees. While the new bill faces legal challenges, some carriers have already begun to alter their operations in California, with some attempting to unwind their exposure to the state completely.

The Morgan Stanley report stated that the best-case scenario would provide no change to capacity in California if all owner-operators were offered and accepted employee driver positions with a company. However, it labeled this scenario “highly unlikely” and indicated independent contractor rules are a creeping concern as other states will likely begin to pursue some type of similar reform. This is already in the works in New Jersey.

Some of the trucking industry’s largest companies have also highlighted a range of headwinds to truck capacity in recent months.

Potential impact to rates and earnings

The report suggested that 2020 could provide a scenario similar to 2018 with regard to truck capacity and rates. In 2018, the year of the original mandate to ELDs from paper logs to enforce stricter adherence to hours of service rules, some truck capacity exited the industry in lieu of compliance. The firm believes that the 2018 mandate resulted in a high-single-digit to low-double-digit hit to truck capacity, causing TL spot rates to spike 30%, with contract rates moving 15-20% higher.

“2020 could potentially see a repeat of the supply-side constraints that drove truck pricing to all-time-high levels in 2018,” the report stated.

It added that these capacity headwinds could provide potential upside to TL EPS estimates “that could close the 20% gap between post-2018 EPS peaks and current trough earnings” as truck pricing moves higher. The firm estimates that the impact of all five catalysts could be bigger than what occurred in 2018. The “low case” presents a scenario in which contract rates increase 2-3% and spot rates climb 5-10% in 2020. The “medium case” calls for contract rates to increase 5-10% and spot rates to rise 20-25% next year. The “high case” predicts contract rates to rise 15-20%, with spot rates surging 35-40%.

Shanker is currently modeling low-single-digit price increases for the TLs in 2020, closer to the low case scenario that calls for spot rates to improve 5-10% in the first half of 2020 with contract rates flat to slightly negative in the first half, but up 2-3% in the second half. The report noted that this scenario results in EPS estimates that are 7-10% higher than current consensus estimates. Further, if the medium case scenario played out, earnings estimates would move at least 10% higher and more than 20% higher if the high case scenario occurred.

From the report, “we have already seen a clear bottom in the second derivative of spot/contract rates, as well as the absolute rates start to rebound, which we believe sets up the TLs well for further boosts in pricing and operating ratio (OR) if truck rates were to sharply rise next year.”

The report also highlighted a scenario wherein there would be upside to Class 8 production forecasts if capacity were culled out of the market due to these catalysts, but it didn’t offer what the impact to earnings for the original equipment manufacturers would look like. The report noted a high correlation between Class 8 truck orders and TL spot rates and stated that Class 8 orders could increase 50-100% in late 2020 to early 2021 if spot rates increased in the 20-25% range.

Lastly, the report noted that the potential increase in rates to ship goods via truck presents an EPS risk (base case) of 2-3% for the retail space and as much as 4-7% downside to estimates if these capacity constraints materialize greater than expected.

Morgan Stanley conducted a survey of approximately 400 carriers, brokers and shippers to produce its expectations around these events. Of those surveyed, 65-70% expect the first three catalysts (ELDs, rising insurance costs and the Drug & Alcohol Clearinghouse) to have at least a small impact on capacity in 2020. Fifty-one percent of those polled expect an impact to capacity from IMO 2020, and 62% see an impact from the California AB 5 rule.