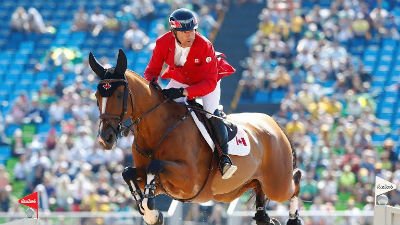 Following this year’s Olympics in Rio de Janeiro, Eric Lamaze remains Canada’s most decorated Olympic show jumper. During the final, he earned a bronze medal in individual jumping. This was his fourth time competing in the Olympics, and the bronze medal was the third one he has earned during his career.

Lamaze’s flawless run was completed aboard his horse Fine Lady 5, a 13-year-old mare. This horse has been compared numerous times to the horse Lamaze won gold riding during the 2008 Olympics, Hickstead. Throughout the event, Lamaze competed with speed and precision as he challenged top-ranked riders, coming in behind Great Britain’s Nick Skelton and Sweden’s Peder Fredricson.

Even though Lamaze had the fastest time in the six-person jump-off, he had to settle for coming in third after having a rail. This was the only rail he had during the entire competition.

We thoroughly enjoyed watching Lamaze compete, as well as all of the other equestrian events in Rio. We look forward to what the Olympics in Tokyo in 2020 will bring for the Canadian equestrian team!

Pay up: Companies confronting the driver shortage one dime at a time